How to Network (FTP) Xbox to Computer (Mac or Windows PC)

How to Network (FTP) Xbox to Computer (Mac or Windows PC)

This is Part 2 of the tutorial. This tutorial will show you how to customize your original Xbox after you have installed the softmod. Visit Part 1 of the original Xbox Softmod Tutorial to get started.
How to Transfer/Install Files to Xbox
There are several ways to transfer files such as Emulators, ROMs and homebrew apps to the original Xbox. The easiest being via FTP program (free). An FTP program is easy to use with our tutorial. To network (FTP) into your Xbox you will need a computer or iOS device see (option #5). We show several ways to transfer files to the Xbox starting with the simplest. Transferring files is everything, there's no need to install a homebrew app, once it's transferred it automatically installs as well. *internet is not required to FTP 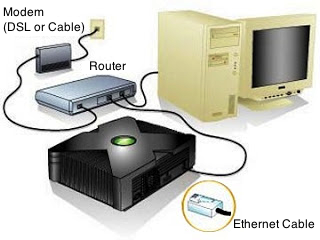 Option #1 - Wired Xbox, Wired Computer: An Ethernet cable is simply any internet cable. As modern technology advances Wi-Fi (wireless signal) has replaced the need for these cables but they are still used. Setting up an FTP connection is easy, simply connect the Xbox and your computer/device to your the same router. *this is the same connection setup for streaming multimedia to the original Xbox via XBMC

This is the most common connection, and it's also what is on the video tutorial. It shows both the computer and original Xbox making a wired connection to the same router, each using an Ethernet cable. In the photo (above & left) aside from the computer and Xbox you see a two boxes, this was an older setup. A more modern setup will have both the modem and router as one unit.
*if your computer is already connected to the modem/router via Wi-Fi than use option #2 below. (Internet is not required to FTP/transfer files)

Option #2 - Wired Xbox, Wireless Computer: A modern Cable or DSL modem does not require a router because they are one in the same. In this case your computer/device can access the modem/router via wireless. Then the only wired connection necessary is the Xbox to the modem/router. (Internet is not required to FTP/transfer files)

If you need further assistance on options 1, 2 & 3 visit the tutorial from xbox-hq.com on How to Network (FTP) a Xbox from PC orHow to FTP using a Apple Mac


Option #4 - Make a Disc: You may be able to create a disc with the files you want to transfer. The Xbox is capable of ripping files from the disc to the hard drive. Your Xbox may look the same on the outside but it all depends on the type of DVD drive you have inside your Xbox. There are three types of DVD drives each with its share of pros and cons, Philips, Thompson and Samsung. CD-RW is recommended, it is the best recognized throughout all three drives.

Philips Drive:
May or may not read CD-R (my Xbox has a Philips drive and reads a music CD that was burned on CD-R)
Will read some (generally expensive media) CD-RW
Reads all DVD-R/DVD-RW
Does not read DVD+R/DVD+RW

Samsung Drive:
Reads all CD-R and CD-RW
Reads all DVD-R/DVD-RW
Will not read DVD+R/CD+RW

Option #5 - Wired Xbox, Wireless Apple iOS device (iPhone, iPod Touch or iPad)
This option should be a last resort since it's for the more computer savvy. It does not require a computer but it still requires a router/modem that gives out wireless/Wi-Fi signal. It's similar to option #2. Here's the iOS tutorial.

There are no products to list in this category.